What should be done with still-usable batteries at the end of their life cycle in electric vehicles? The Battery 2nd Life project organized by Vattenfall, BMW and Bosch merges them into a large storage facility in Hamburg, Germany, to keep the electricity grid stable. 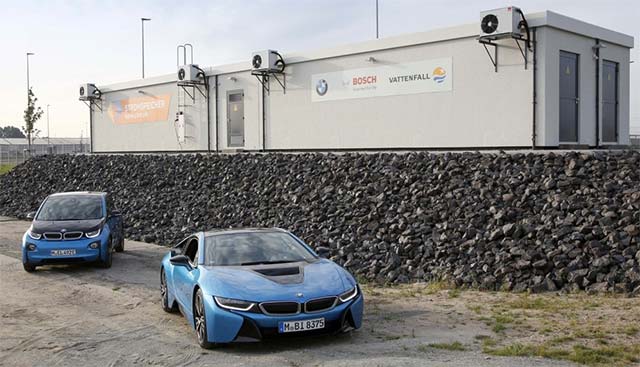 Electromobility and electricity storage are two core elements of the new energy landscape. Used batteries from electric vehicles are being merged to form a large electricity storage facility in Hamburg. The stored energy is available within seconds and can help to keep the electricity grid stable. Electricity storage is essential to enable a stable electricity supply with alternative energy sources. Natural fluctuations in solar power plants and wind turbines must be compensated as much as possible using storage methods with the greatest possible efficiency.

The electricity storage facility consists of 2,600 battery modules from over 100 electric vehicles. It has a power rating of two megawatts (MW) and a storage capacity of 2,800 kilowatt-hours (kWh). This is enough to supply electricity to an average two-person household for seven months. However, the stored energy is not intended for general supply, but instead is sold on the primary control reserve market by Vattenfall, along with power from other flexibly controllable facilities. The storage facility delivers primary control reserve power necessary to keep the 50 Hz grid frequency stable. Primary control reserve power must be available within a few seconds.

The joint project provides a useful second life for batteries previously fitted in BMW electric vehicles which have reached the end of their life cycle in the vehicle. After the used batteries have been tested and wired up, they are merged into the electricity storage facility where they constitute an important resource of the new energy landscape in stationary deployment.

The Battery 2nd Life development project organized by Vattenfall, BMW and Bosch kicked off in 2013 for a planned term of five years. The project partners hope to learn more about the aging characteristics and storage capacity of used lithium-ion battery modules.

Along with the electricity storage facility near the Steinwerder Cruise Centre in Hamburg, the project encompasses two other measures: Used batteries have been providing interim storage and power buffering for fast-charge stations in Hamburg’s HafenCity district since September 2014.

In another application, energy consumption from the photovoltaic facility of Vattenfall’s HafenCity district heating station is being maximized by interim storage of energy in batteries during sunny periods with low electricity demand.