Eleven plants. One-hundred and eighteen countries. Eighty-eight awards. And now, 3 million sales for the Chevrolet Cruze. The best-selling Chevrolet model crossed the milestone this month, just 16 months after selling its 2 millionth model. From the U.S. and Canada, to Laos and the Philippines, to Lebanon and Qatar, the Cruze has proved itself a global player among small cars. 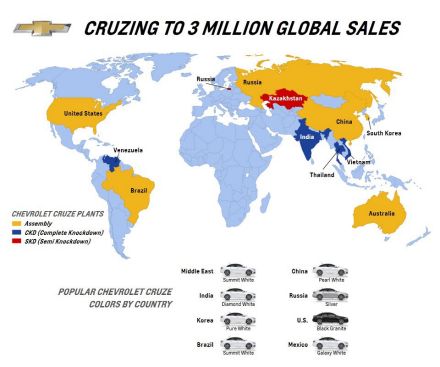 “The Cruze is an extremely adaptable car that can cater to the demands of nearly every market in the world,” said Alan Batey, GM executive vice president of Global Chevrolet told Tech Poke. “It is a testament to Chevrolet’s global focus and capabilities to offer a car that is so highly regarded in so many places.”

Chevrolet is committed to building product in – or near – the markets where they are sold. Cruze is built in 11 different countries on five continents and sold in 118 countries.

“Small car sales around the world have been growing exponentially as emerging markets, in Asia and South America, increase car ownership while mature markets, like the U.S., downsize for fuel economy,” said Michelle Krebs, senior analyst for AutoTrader.com. “Small cars like the Cruze are driving sales globally and will continue to do so.”

The Cruze endured intensive durability testing, including extreme weather tests and more than 210 crash tests tailored to the regulatory demands of the countries where it is sold.

To appeal to the different markets’ tastes, the Cruze is available in in three body styles, including a four-door sedan, five-door hatchback and station wagon. Cruze is powered by five different engines, 1.4-, 1.6-, and 1.8-liter gasoline engines, and 1.7- and 2-liter diesel engines.

“The cost of energy is going to be an issue for a long time and in most markets that’s a big consideration,” said Joe Phillippi of AutoTrends Consulting in Andover, N.J. “If you can offer someone very affordable, high quality transportation at an affordable price with a substantial package of safety equipment, that’s a big plus.”

Chevrolet recently launched a new version of the Cruze catering to the styling and packaging demands of Chinese customers. Cruze sales in China lead all countries with 1.13 million sold since launch in 2009.

For the U.S. market in 2015, the Cruze will have OnStar with 4G LTE standard, providing passengers with a mobile Wi-Fi Hotspot for up to seven devices. The 2015 Cruze will also have Siri Eyes Free integration, allowing users to text, call, ask for directions and even send email while keeping their eyes on the road and hands on the wheel.

The U.S.-market 2015 Cruze has an available 2.0L turbocharged clean diesel engine, allowing drivers to cruise 717 miles on one tank of fuel.

Top 10 Markets for Cruze and sales through July 2014