The wholly-owned Daimler commercial vehicles subsidiary Daimler Trucks North America (DTNA) is celebratingthe production of its three-millionth vehicle in Cleveland. The anniversary truck Freightliner Cascadia Evolution is going into customer operations at “Schneider”, one of the largest logistics and transportation service companies in North America with around 80 years of business history. Schneider’s fleet of over 25,000 Freightliner trucks will now be supple-mented by the jubilee truck.The Freightliner Cascadia Evolutionis equipped with the completely integrated drivetrain of the Detroit component brand including the fully automated DT12 transmission. The flagship model is setting new standards for savings of operatingcosts. Compared to its EPA 2010-conformant predecessor model the Freightliner Cascadia Evolution achieves up to seven percent higherfuel efficiency. 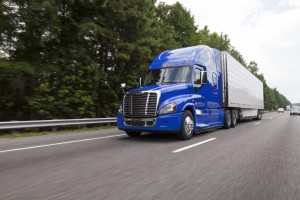 “The integrated drivetrain from Detroit is a prime example of the pioneering spirit and innovation power that have made Freightliner the undisputed market leader in the North American commercial vehicles industry”, says Martin Daum, President and CEO of Daimler Trucks North America told Technostuffs.

DTNA is the only truck manufacturer in the NAFTA region to develop and produce a fully integrated drivetrain from one single source. The customers benefit from these optimal consecutively adjusted drive components consisting of engines, axles and transmissions of the Detroit brand.

Since the production start in the year 2013, the Freightliner Cascadia Evolution has already been ordered more than 50,000 times. The model is making a significant contribution to the success of Daimler Trucks in the NAFTA region, where Daimler sold around 135,000 commercial vehicles last year. In view of the expected market growth in the NAFTA region, in the current year unit sales should continue to develop positively to a significantly higher level than that seen in the year before.

In addition to the announcement of the production of the three-millionth commercial vehicle, Daimler Trucks is celebrating two other milestones in the production network in North America this year. In the middle of the year, Daimler topped the million mark of Detroit axles produced in the aggregates plant in Redford, Michigan, where the company has been making axles for buses and trucks of DTNA since 2003. Moreover, in July of this year, the 250,000th Detroit engine rolled off the line in Redford. The Detroit engine family convinces with its high powerdynamics and superior performance.